INPADOC Enhanced Coverage with Documents from the Ukraine

In the past weeks about 61.000 records from the Ukraine have been added to INPADOC (INPADOCDB and INPAFAMDB) which increased the number of Ukrainian records by 30% to more than 255.000. Over 56.000 of these records have a publication year between 1993 and 2005. About 30,000 records are “Declarative patents for invention” with the kind code UAA, which have a term of 6 years, and more than 12,000 records are “Patent for Invention, filed within the patent office of the USSR”.

Over 85% of all UA publication are only published in the Ukraine. Patent assignees are often universities and research institutes. About 10% of the UA publications are also filed as PCT applications. Other co-filed patent authorities are the EPO and the patent offices from the United States, China, Canada, Japan, Australia, and Russia. This picture is almost the same for all application years since 1993. Only the relative number for Russia have decreased in the past years while those for the Eurasian Patent Office have increased.

More than 90% of all publications since 2004 have either an assigned CPC or IPC code, however, for early publications the CPC/IPC-coverage is quite low. The publications cover a wide range of CPC/IPC codes. About 75% of all UA publications have title and abstract in English. 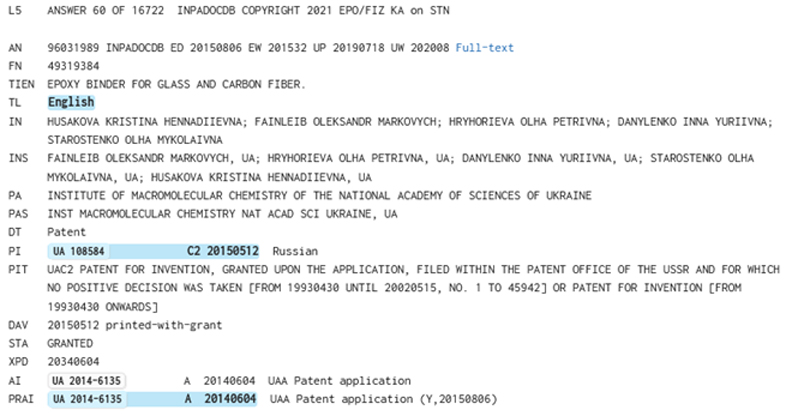